A downloadable Visual Novel for Windows, macOS, and Linux

Mr. Charles Keating will finish his sentence at the Delisle Correction Facility at midnight tonight - unless he confesses to his even greater crimes against nature!

Romancing Flesh is a kinetic visual novel with the  style of classic Universal Monster films, and the body horror schlock of direct-to-video scary movies!

Through audio recordings,  letters, photos, and film, discover what drove Charles Keating from being a normal college graduate, to a mad scientist whose passions drove him to unethical experimentation, self mutilation, and forbidden love .

This game was made for Spooktober 2021 Visual Novel Jam!  Please rate and comment!

I am a chinese,i think the story is pretty good ,but i can not understand some wrods can you Give me the Chinese version ?thank you !(i love this story!)

my heart aches for them. Thank you for creating something so beautiful.

Cool creative game. Congratulations ! I am from Argentina and I wrote horror and terror stories. If I can help you, count on me

This line made me laugh immediately; "I hear if I were a service member, the letters I send you would look like swiss cheese, and we don't want to exacerbate your lactose intolerance."

Just from this line alone I knew the writing was going to be good. And it was!

This game is such an interesting take on a Visual Novel! I've never seen one where the text moved around the screen as much as it did in this one. It's certainly refreshing! Not to mention the interactable case files. Changes things up from the typical VN format. It's refreshing.

The initial set up of this being an institute based on early psychology interested me due to my educational background (and I had to laugh at the curator admonishing Charles Keating for pursuing science for psychology is a science as well lol).

That ending caught me off guard in the best of ways. Great little game! I'm glad I played c:

I'm really glad you enjoyed it!

Reply
Meeka Nomicon274 days ago(+1)
I am not sure what the creepiest art of the game is, the monstrous creatures that you created, or just the scientists with their eyes shifting. Both feel inhuman and creepy and really add to how dark the story seems.

A lot of the experiments feel really strange, especially when they made a flower out of toes, it feels like the scientists started creating things because they can without purpose. While I am not sure what he becomes at the end, it was so strange and creepy and gave me the feeling of Cronenberg movies.

Really great game, and the visuals are truly amazing and stand out from some of the horror games I played.

Thanks!  I'm glad you enjoyed it!

You created a visual and narrative masterpiece.  I love the horror and the science fiction combined but I really enjoyed the story.  You did your research and the vintage paperdoll characters added a really nice touch.  I truly felt like I was pulled into the story and couldn't stop playing till I found out what happened next.  I really hope you create more stories as you have so much talent and imagination!  You could write scripts for movies!

Thank you!  That's very kind of you to say!  I have another project in progress that should hopefully be up at a decent state this fall!

This was really cool! I really enjoyed the story and the execution. Terrific work!

Thank you!  I'm glad you enjoyed it!

Wow! This game was amazing. Everything really contributed to the mood, and I loved the story and all the animation. This was really interesting to play, and really impressive work.

I knew Charles was gay from the first letter. Complicated relationship with a parent who is hyper-masculine? I think a lot of queer people can relate. I was pleasantly surprised to be proven right and then horrifically gutted by the ending. Also, vagina dentata anyone? That was my first thought - I am glad to see that it was likely intentional.

The story-telling is incredible. The prose is heart-wrenching. The warden's monologue, at the end: "a mama's boy sticking his meat in the dirt, hoping it'll grow" and Mr. Keating's physical transformation into the monster the authorities and, presumably, his family believes him to be. Taking back his humanity from his captors. The letter to Sergei at the end. The life they created together, but was denied to them by a fearful and violent antagonist. I tear up thinking about it. I have not stopped crying over this visual novel for hours now.

As a queer person, this hurt a lot - like flushing out a septic wound. The body horror was quickly subsumed by the social horror playing out, and became its own metaphor for dehumanization. The pain is palpable and beautifully displayed. Thank you for sharing.

Hello. Which game engine/language you used for your game?

This is built in Ren'py, a visual novel engine based on Python.

oh, this is truly gorgeous. I mean- it was disgusting, and even the most innocuous animation hit that uncanny valley viscerally enough to make me cringe, but I'm also strangely attached to the story and actually found myself rooting (hah!) for the two characters. there's a depth to both those characters and the moral questions posed that makes the whole thing so deeply memorable. and the interplay between the nature (hah!!) of the body horror involved and the contextual realities of the forbidden love, especially with the ending, feels like something that's going to be living rent free in my mind for a while.

this game was truly beyond expectation, i didn't expect to get so attached to the people in it. without getting into spoilers, the ending almost brought me to tears

The double meaning to the Jack and Ulna experiment... needed a second read to catch that! I really loved the visuals of the creatures, wished we could see some animations of the flesh-flowers.

Will there ever be a sequel?

PS. I think the examination phase is a little buggy, some documents stay on the screen when navigating text and there's a bit of rewinding here and there when I press Enter to advance.

As a fan of horror and an ENVS student at Tufts, I absolutely loved this story! I was also really enchanted by the vintage mixed media stylizing. I'd like to see more games like this.

I did not play it myself but just watched a Youtuber play it. I liked it so much that I had to comment praises. The animation is really cool! A bit unnerving, and perfect for the aesthetics. A fun way to make the story more engaging as you play. I loved the style of the art--the eerie designs of the creations. The romance, the relationship, and what it was saying, that hit well. A bit subtle, but clear, what they were going through and how it related to the project. Then the ending, the unexpected parts. Creepy, yet also sweet? Leaves you feeling unsure of how to feel. Morally gray.  Very well done!

This game hit hard. How the initial monologue hit and how the story develops, body horror as a way to tell something more than shock value and be more visceral (pun some what intended). Amazing work and cant wait for more.

Uncomfortable? Gross? Disgusting? I can't find the word to what experiment horror I just witnessed (literally because I'm not english speaker lmao). Love how it's also a gay allegory~

I really liked the quirky style this has! The chemistry between the characters was also great. The examination phase was sometimes a bit buggy (the recording dialogue showed on top of the next scene or didn't always show at all), but I liked it as a feature. I'd like to see more games in this style!

What!! What. That was really cool! All the characters acted very, very real. Despite the title I wasn't expecting to see any romance in this game but you know what, the awkward flirting was great and made total sense.

I loved all the photographs too, they were gruesome and beautiful at the same time. What happened with Ulna and Jack? I wish to know. I'm emotionally invested in their relationship.

What an unsettling story. I really enjoyed it!

Loved the story and the animations! Very creepy. 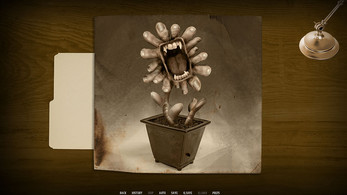 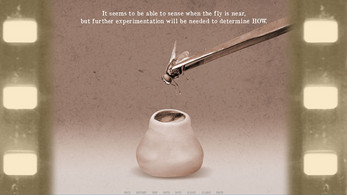